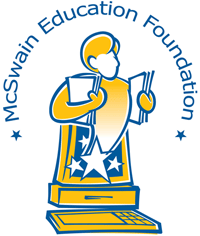 The Foundation makes Chromebooks a reality for our students.
The McSwain Education Foundation has three major annual fundraisers to generate funds to be used in the immediate future.
These annual fundraisers help provide more than $50,000 each year to help support the school.
Reading is Fun Week
Reading is Fun Week, usually held in February, is sponsored by the McSwain Education Foundation. This week highlights the importance and fun of reading by inviting guest readers into the classrooms, having reading themed dress-up days, and culminating with an extended time of relaxed reading on Friday. A visit by an accomplished author is also included into this week's activities. Our Read-A-Thon fundraiser is also scheduled during this week, money raised during this activity goes into the Foundation's general operating capital to make funding available for purchases the school otherwise would not be able to afford.
Golf Tournament
The McSwain Friends' and Neighbors' Golf Tournament is another opportunity to invest in the future of the McSwain community. Students and staff continue to work diligently to maintain our high academic standing, but we also believe that our programs such as music, art and athletics contribute towards our high academic success. In order to continue to offer the students opportunities to participate in music, art and athletics we need additional funding. In the past, the proceeds from the tournament have been divided between music, art and athletics. You can support McSwain students by being a hole sponsor, corporate sponsor, student athlete, artist or musician and by donating raffle prizes or other items and/or playing in the tournament.
The Annual Dinner Dance & Auction
We hold an annual fundraising event - dinner, auction and more -- that raises the bulk of our working money. We try to spend all of the money raised at our September event on our students through teacher-initiated grants.